Last week I went into Performance Bicycle to see if we could somehow make my 22 year old bike somewhat comfortable for me to ride. So I got a much-needed new seat, and had it raised a bunch. I also had them put on clip-in pedals. Of course I have only “clipped-in” to a stationary spin bike before, so when the guy told me to test it out by riding around the store, I ended up falling over into a display rack!

Viola, an earth-mother looking woman said “That shouldn’t of happened. I would have coached you differently. When they bring the bike back to the front of the store (there was an issue with the pedal), I will coach you on how to get on. So she did, and I didn’t fall into the display! She is such a fabulous, supportive coach, and she gave me the confidence to ride. She also told me that she leads a women’s ride every Sunday morning at 9am from the store.  So I planned to ride this morning.  I was so excited!

When I arrived, I learned that “Vi” (Viola for short) was out of town and that Dave would be leading the ride. I was quite disappointed at first, but I am very grateful actually.

Dave arrived with his wife Susan and their bicycle-built-for-two. Susan was disabled and walked with the kind of crutches that go around your wrist. Dave took one crutch at a time as Susan mounted the bike, and he slipped the crutches on either side of the basket at the front of the bike, and secured them with a bungie cord. I said “You have that down to a science!” And Dave replied “Well you would think after all of these years we would!”

So it was just me and them, and since I am relatively new at riding we decided to do an easy ride along the trail down to REI on Platte River. When we got there we parked our bikes and shmoozed for a while. Dave asked me if I had any questions about the ride, so we talked about how to know when to switch gears, and reviewed clipping out when stopping (I guess I should admit here that on Friday afternoon when I biked over to the library, I fell into a pole because I didn’t clip out fast enough!)  We talked about my triathlon last week and the blog post I ended up writing about it. (You can read it in the archives if you missed it.)

Then I learned about by riding coaches. Dave is a Vietnam veteran and came to Colorado to ski after his tour. He met Susan while she was “adaptive” skiing, as she has been disabled since birth. I had imagined that she had been able-bodied and got hurt in a biking accident. But I was wrong.  She has been doing adaptive sports for a long time. They met and got married and had a daughter who is now 30.  Dave is retired from the RTD and Susan is retired from being a case worker for people with disabilities. Susan used to ride her own bike, but they prefer to ride tandem now. They recently completed the “Five Boroughs” bike race in New York.

When we got back to the store, Susan said that she would love to get my blog posts. We chatted a bit and I said how I was so excited to finally enjoy bike riding. It was never really that appealing to me, but with the new seat and terrific coaches, I can see this going somewhere! I told her that it took me a while to fall in love with running, but I love it now, and she said

“I can’t imagine why anyone would NOT love running if they could.”

That stopped me in my tracks. It is so easy to take so many things for granted, and then complain about things too! I told her that as Jews, we have blessings that we say each day on the ordinary things in life, such having a straight spine, eyes that can see, feet that walk, elimination (as in bathroom). Susan never had the option to run, yet she has made the absolute best of what she COULD do.

I thought I was going for a bike ride today. Instead I got a big dose of gratitude, to God for my able body, to Dave, for his sacrifice for our country, for Susan for teaching me the power of human resilience. 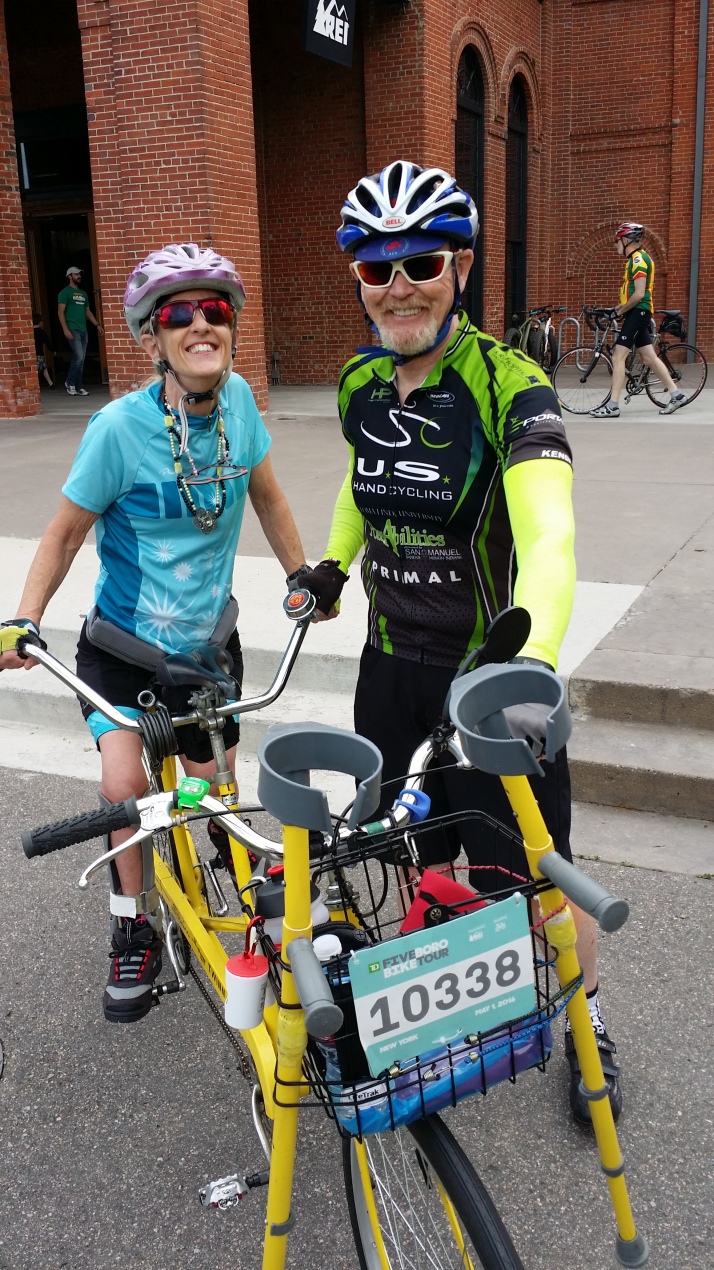 One thought on “Lessons From a Bike Ride”